Complexity of "can we get a cycle by stacking directed bipartite graphs?"

I am trying to find the complexity of the following problem:

What I already know

It is not hard to show that the problem can be solved in polynomial time when there are exactly two arcs for each graph $G_i$, using the following algorithm:

I am not sure whether this procedure can be extended to a polynomial algorithm also when considering graphs without a fixed number of arcs, since the number of nodes in $\mathcal{G}$ can be higher than $m$ in this case. For instance, the graph $\mathcal{G}$ associated to the example above is

Is the complexity of the general problem (in which the number of arcs in each graph $G_i$ is not fixed) known? Any reference on similar problems would be useful. 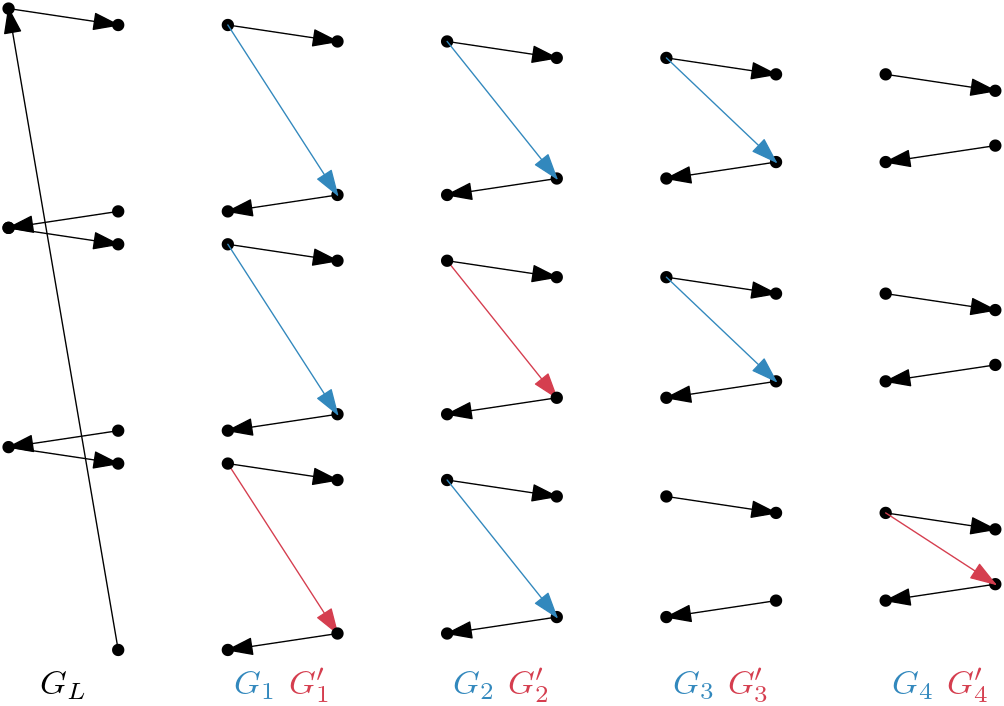 The idea is to create a graph $G_L$ (pictured on the left) that consist of two edges per clause and has the only upward pointing edge of all the $G_\bullet$, so any cycle must use that edge. For each variable $x_i$, create a variable gadget consisting of two bipartite graphs $G_i$ and $G_i'$. $G_i$ consists of the blue and black edges, and $G_i'$ consists of the red and black edges. For each clause, each variable gadget contains two black edges, and a blue edge if the corresponding variable appears positively, or a red edge if the variable appears negatively in the clause. The variable gadgets are constructed such that for the rightmost bipartite graph in the stack to be relevant, $G_1$ or $G_1'$ must be placed right of $G_L$, and $G_{i+1}$ or $G_{i+1}'$ must be placed right of $G_i$ or $G_i'$. This ensures that any cycle can use only $G_i$ or $G_i'$, but not both. It is clear that if the formula is satisfiable, you can pick $G_i$ and $G_i'$ based on the satisfying assignment, in such a way that the resulting graph has a cycle. Conversely, if a stacked graph has a cycle, then the graphs $G_i/G_i'$ visited by that cycle give a satisfying assignment. Hence, the problem is NP-hard.

To show that the problem lies in PSPACE, it suffices to show that it lies in NPSPACE. For this, a non-deteministic turing machine can guess an arbitrarily long sequence $\{i_1,\dots,i_p\}$ whose stack contains a cycle that uses an edge of the rightmost graph in the stack. Let $H_k:=\bigotimes_{j=1}^k G_{i_j}$ be the substack consisting of the first $k$ graphs of the sequence. The rightmost boundary of $H_k$ contains $n$ vertices. Let $R_0$ be the empty graph. For $k>0$, let $R_k$ be the directed graph on $n$ vertices, such that there is an edge from vertex $u$ to $v$ if and only if $H_k$ contains a directed path from $u$ to $v$. We can in polynomial time compute $R_0$, and also $R_k$ given $R_{k-1}$ and $i_k$. Hence, a non-deterministic Turing machine can compute $R_{p-1}$. Given $R_{p-1}$ and $i_p$, we can in polynomial time test whether $H_p$ contains a cycle based, so the problem lies in NPSPACE and hence PSPACE. This algorithm also shows that the problem is fixed-parameter tractable in $n$: the number of relevant graphs $R_i$ is at most the number of graphs on $n$ vertices.

As suggested by Tim here, the problem can be shown to be PSPACE-hard by reduction from the Corridor Tiling Problem:

Question: is there any height $m\in\mathbb{N}$ such that an $n\times m$ rectangle with all borders tiled by $T_0$ can be tiled by elements of $\mathcal{T}$?

Example: $n=4$, $\mathcal{T}$ and $T_0$ as in the figure. This is a yes-instance for the Corridor Tiling Problem, as shown by the rectangle on the right. 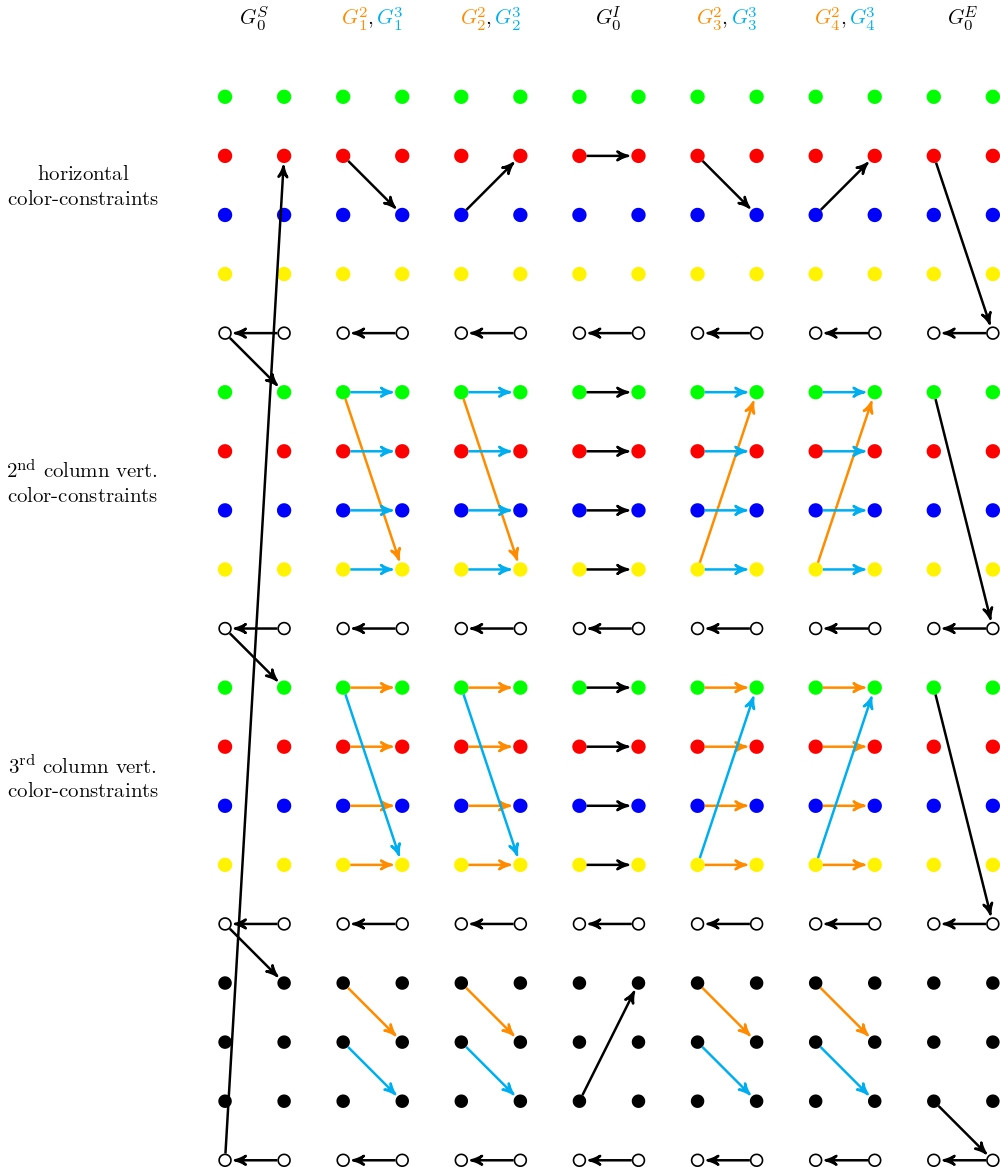 By construction, the tiles of the instance of Corridor Tiling Problem can form a $n\times m$ rectangle if and only if the associated bipartite graphs can be stacked to form a $[(n-1)(m-2)+2]$-partite graph containing a cycle. Thus, the problem is PSPACE-hard. Since the problem belongs to PSPACE (as shown in Tim's answer), then it is PSPACE-complete.

Not the answer you're looking for? Browse other questions tagged cc.complexity-theory graph-theory graph-algorithms co.combinatorics bipartite-graphs or ask your own question.

14
Generating Graphs with Trivial Automorphisms
9
Bounding the number of edges between star graphs such that graph is planar
9
Is DAG isomorphism NP-C
3
Finding a minimum directed cut that splits a weakly connected bipartite graph into two such non-edgeless graphs
1
Color shifting in a bipartite graph
1
Does Hadwiger conjecture imply that NP = coNP?
7
Extending cographs with product operation