I have the below problem. I wonder if there exists a similar known class of problems (e.g., in optimization, graph theory) which I can relate my problem to, and find a similar solution there.

I am working on computer networking optimization. In the simplest scenario, we model the network as a graph with a circular node topology which each edge has a cost known as weight, similar to the attached photo. Each node(vertex) can have a maximum number of X

active links (edge) to other nodes at any given time. Then it can open, maintain, or close links (each operation has a cost associated with it). If there isn't a direct edge, traffic(some data traversing from a source node to destination node) must be routed through neighboring nodes. What is the best link structure(optimal set of edges in the graph connecting nodes) in the underlying graph given the predicted traffic intensity matrix between the nodes? (The set containing the links possible to choose can be a complete graph that is represented in the figure by grey edges.)

Note: the optimal link structure should be recalculated on a regular basis to account for history (for example, it is worthwhile to keep a connection between two nodes open even though there is no traffic at the current time because it was generally a busy link in the past and the chance of using this link is high in future). 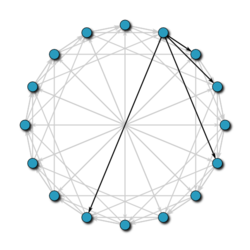