(Preface)
We consider only finite, simple, undirected graphs here. An orientation of a graph $G$ is obtained by assigning some direction to each edge of $G$.

It seems that line graph of $CL_{4q}$ has such a decomposition. $CL_{4q}$ is the circular ladder graph such that inner and outer cycles are the cycle $C_{4q}$; e.g.: $CL_4$ is the cube (also called 3-cube). Such decompositions of $L(CL_4)$ and $L(CL_8)$ are given below (all intersection points are vertices, and the four cycles are given distinct colours). 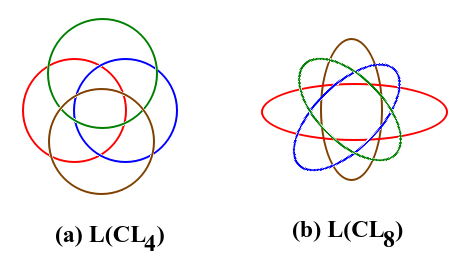 Browse other questions tagged reference-request graph-theory co.combinatorics or ask your own question.