Another variation of $k$-means problem in the plane

According to wikipedia, consider $k$-means problem in the plane :

We know that there is constant factor approximation algorithm for $k$-means problem. Now, consider this example that we find $3$-means clustering in the plane: 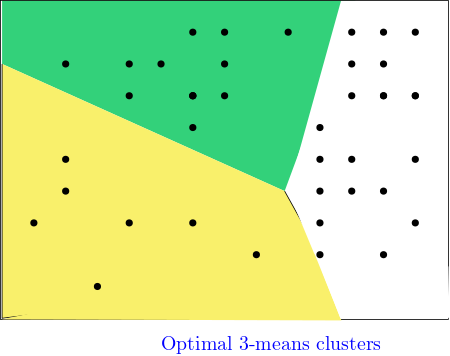 But we want modify the above clusters such that we create such clusters that each cluster has a rectangular shape as bellow: 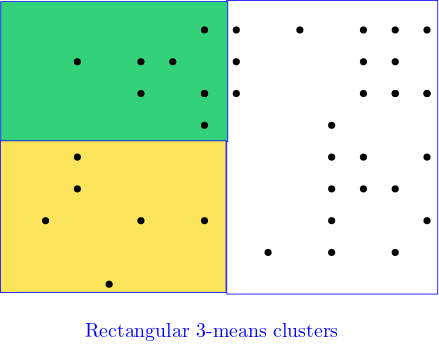 ds.algorithms approximation-algorithms
Share
Improve this question
edited Mar 23 at 18:06
All
asked Mar 21 at 19:40

I assume here that any approximation algorithm must return some feasible $k$-cover, as long as the given input has one. By a $k$-cover of a given set $S$ of points in the plane, I mean a set of $k$ pairwise-disjoint axis-parallel rectangles such that every point in $S$ is in one of the rectangles.

Theorem 1. No such approximation algorithm runs in polynomial time, unless P=NP.

Proof. If there were such an algorithm, it could decide the following decision problem in poly-time: given $(k, S)$, does $S$ have a $k$-cover? (regardless of objective). By Theorem 2 of [1], this decision problem is NP-hard. $~~~\Box$

Remark. The theorem assumes $k$ is part of the input. For any fixed $k$, the problem can be solved in poly-time by exhaustive search, as there are $O(n^4)$ distinct rectangles to consider, so $O(n^{4k})$ possible covers, so there is an exact algorithm that runs in time $n^{4k+O(1)}$.

Not the answer you're looking for? Browse other questions tagged ds.algorithms approximation-algorithms or ask your own question.

12
A Multi-cut Problem
9
Bisecting a set of points into two optimal subsets
1
Two valued variant of subset sum problem
0
How to build the tree with the "most different" solutions of a clustering?
0
Partition a graph into two clusters
1
2-Center problem with forbidden pairs
4
Maximum Vertex Cover