Tensor network contraction "bubbling": why are some approaches more computationally efficient than others (question from a beginner)

I am learning the very basics of tensor network theory and I am trying to understand why some ways to contract tensors are better than others in terms of computational complexity. Knowing in which order we should contract the tensor is known as "bubbling".

As a reference, I am following this paper, bubbling is described on page 7 (my background is quantum information, I need to understand how tensor networks are used to represent entangled quantum states).

I am following the examples on page 7 of this paper and for that I consider a ladder-shaped network. I put some notations first (don't pay attention to the dotted circle on this first image). 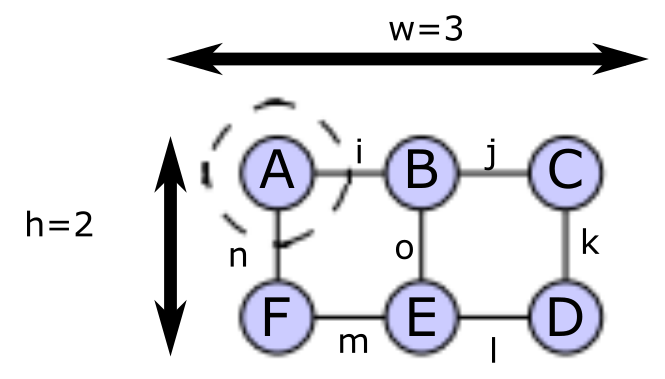 As a reminder, what this graph means is basically the number:

Where, $A$, $B$,... are tensors of rank given by the number of indices they have. The principle of "bubbling" is to try a way to compute it in the most "efficient" manner from a computational perspective. To do it, we can either contract the tensor network through the first manner (below):

Or the second one:

For the first approach, what we will have are the following steps in the computation:

For the second approach, we will have the following:

Those explanations are what I understood from the paper linked.

It is not completely apparent because we fixed $w=3$ in this example, but in the first approach, for a ladder of width $w$ (and height $2$), during the computation, we will have $w$ links in memory. This is apparent for instance at step $2$ of the first approach, we see that $X^2_{nol}$ (it depends on three indices here and for the general case it will depend on $w$ indices). Because of that, if each link has a dimension $d$, we will have $d^w$ elements to keep in memory.

As here $w=3$ the difference is probably not so clear with this specific value of $w$ (but this is the example taken in the paper, I hope it will be clear enough for the readers)

What disturbs me - my questions.

I am not sure to fully understand the logic. Even though the "actual" computation we are doing requires $d^w$ terms in memory for the first approach but a number that doesn't grow with $w$ in the second one, we need "anyway" to keep in memory the tensors that we are not summing. For instance at a given step $n_0$ of the calculation, maybe some tensors haven't played any role yet (they will be summed in the future), but I have to have them in memory somewhere. If we take this into account, wouldn't it imply that both approach are actually similar in terms of memory consumption?

Here, I mainly talked about the memory consumption of the two approaches. What about the number of calculations to be done? Could I have an explanation telling me why the second approach is "better"?

This question is simply to check that a "ladder-shaped" network is a network in which the width grows with some parameter $w$ while the height is constant. In the paper they actually don't give a precise definition of what it is.

graph-theory optimization
Share
Improve this question
edited May 9 at 17:11
Marco Fellous-Asiani
asked May 1 at 14:11

For multiplying square $d \times d$ matrices, the naive algorithm uses $O(d^3)$ arithmetic operations, but the exponent of matrix multiplication is known to be quite a bit smaller (albeit by theoretical algorithms that, at the moment, are not practical at exponents below ~2.7). For multiplying non-square matrices, sometimes better can be done, e.g. https://people.csail.mit.edu/virgi/6.890/papers/legallurrutia.pdf implies you can multiply a $d^2 \times d$ by a $d \times d^2$ matrix in times $O(d^{2.04...})$.

Not the answer you're looking for? Browse other questions tagged graph-theory optimization or ask your own question.

14
Is there an online-algorithm to keep track of components in a changing undirected graph?
2
Edge labeling in $K_{m,n}$
14
What is the state of the art in cache algorithm theory?
1
Is this a knapsack problem?
6
Complexity of optimal elimination for a planar tensor network
1
Growth rate of Knapsack Solutions