Ask Question
Asked 15 days ago
Modified 11 days ago
Viewed 201 times
2
$\begingroup$
Closed. This question is off-topic. It is not currently accepting answers.

Your question does not appear to be a research-level question in theoretical computer science. For more information about the scope, please see help center. Your question might be suitable for Computer Science which has a broader scope.

I have to design a hoodie for my computer science batch, and I want it to be related to Theoretical computer science. I don't want to slap on some text with HTML-like angle brackets, but actually want something cool + nerdy that only people with some basic knowledge of CS might understand. I would be grateful, if you could give some suggestion, resources for ideas, or links to similar products. Thank you.

I've always found this tattoo pretty daring. Would work on a hoodie.

As an undergraduate student, I was a bit mystified by the occurrence of the notion of entropy (from physics) into theoretical computer science (at the time, for the description of the optimal compression of a text with $n_i$ occurrences (summing to $n=\sum_{i\in[1..k]}n_i$) of each symbol $i\in[1..k]$ by prefix free codes, such as the one described by David A. Huffman) and its (at the time to me) occult definition: $${\cal H}(n_1,\ldots,n_k) = \sum_{i\in[1..k]} \frac{n_i}{n} \log_2\frac{n}{n_i}.$$ Since then, I have learned to respect its potency and adequacy in measuring the (des)equilibrium of probability and frequency distributions, and I have used it to measure the spaced used by compressed data structures, the time used by adaptive algorithms (in internal and external memory), sometimes in convoluted ways, and even in instance optimality results. 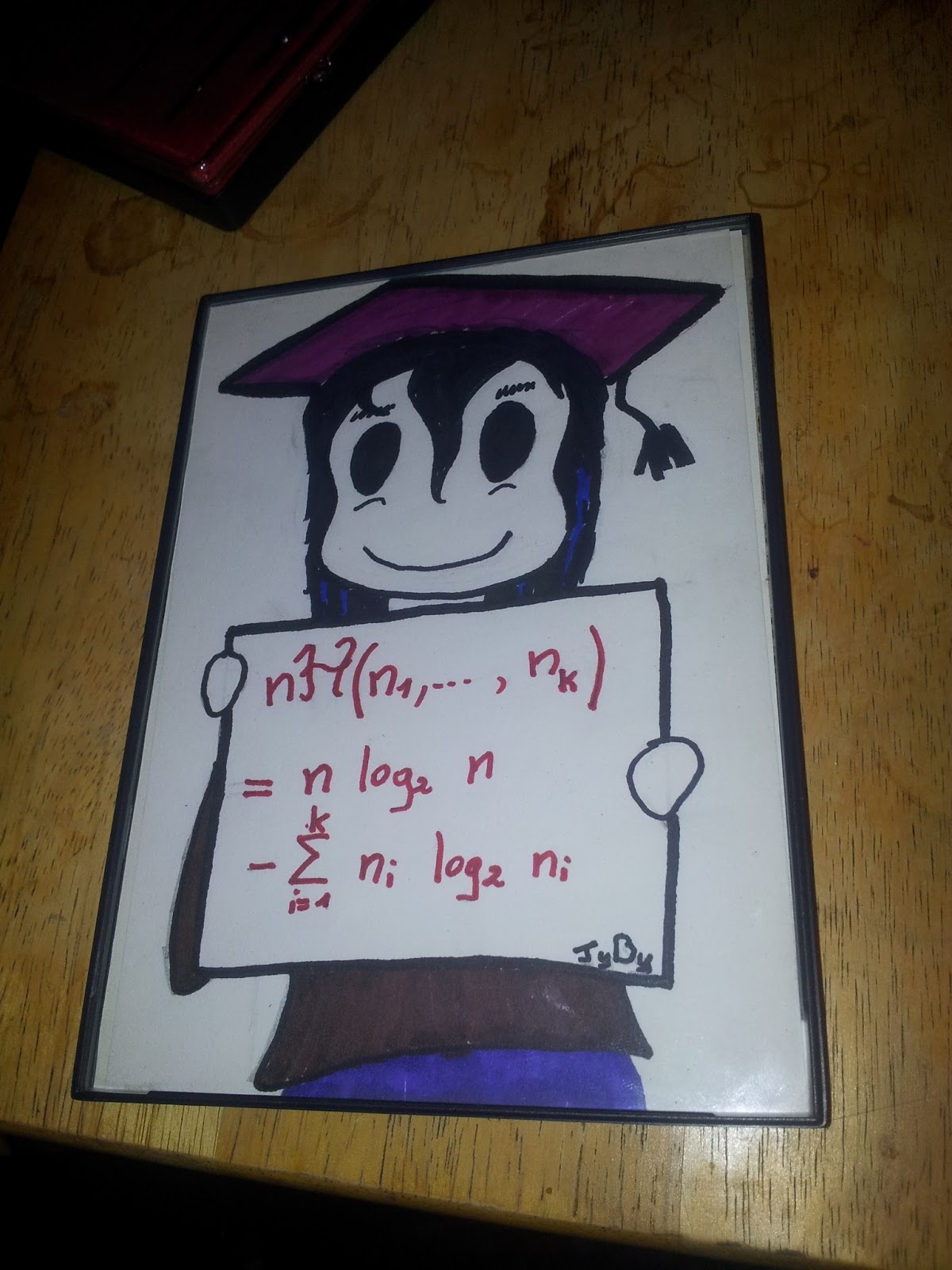 In 2013, for a colleague's birthday anniversary, I drew quickly a feminine character holding an equation often used in our research, one of the definition of the entropy of a vector of integers. At the time I wrote on my blog "I hope that he will hang it in his office so that it helps his students to memorize it!", and a few years later, a PhD student admitted that he searched on the web for the blog post to find back the formula :).

The definition of the entropy that I used in this drawing, $$n{\cal H}(n_1,\ldots,n_k) = n\log_2 n - \sum_{i\in[1..k]} n_i \log_2 n_i,$$ is a bit atypical (one typically normalizes both sides of the equation by $n$, and combines the two $\log$ terms into one, maybe so that to make it closer to the definition used by statistical physicists). I like this formulation better because it highlights the terms measuring the imbalance of the distribution, and give an intuition into the various analysis which lead to such a formula.

Feel free to use either the formula itself or the drawing: I would be honored! (Do let me know if you do!)

7
Is a CS degree for me?
20
What is the right theoretical model to design algorithms for current and upcoming high performance computers
37
What is the smallest result you publish on ArXiv?
26
Can one return to a TCS research job after an excursion to a non-research industry job?
14
Resources for mathematicians hoping to learn more computer science
15
Theoretical computer science self-study resources for programmers
13
How do journals serve the TCS community?
7
Do I have to give up the Law of the Excluded Middle in order to Learn $\lambda$-Calculus?
17
Where to learn more about what Theoretical Computer Science is?
10
How do conference proceedings add to academic prestige?