I am looking for an easy example of two transition systems that are LTL equivalent, but not trace equivalent.

I have read the proof of Trace Equivalence being finer than LTL Equivalence in the book "Principles of Model Checking" (Baier/Katoen) but I'm not sure I really understand it. I am unable to picture it, is there maybe a simple example that can visualize the difference?

Reading Baier and Katoen closely, they are considering both finite and infinite transition systems. See page 20 of that book for definitions. 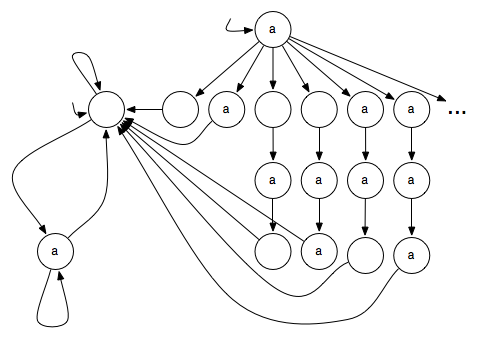 Thus, $NOTEVEN$ and $TOTAL$ are not trace equivalent. Suppose they were LTL inequivalent. Then we would have an LTL formula $\phi$ such that $NOTEVEN \vDash \phi$ and $TOTAL \not\vDash \phi$. But then, $EVEN\vDash \neg\phi$. This is a contradiction.

Thanks to Sylvain for catching a stupid bug in the first version of this answer.

Any LTL formula that holds universally for $A$ will hold universally for $B$ because $B$ is a subset of $A$. Any LTL formula that holds for $B$ also holds for $A$; for the sake of contradiction, assume not, but that $\varphi$ holds for every element of $B$ (i.e. for every element of the universe expect for the word $w$) but not for $w$. Then $\neg\varphi$ evaluates to true on $w$ but not on any other word of the universe (and LTL is closed under negation), and there is no LTL formula that can be true only for $w$ as every Buchi automaton that accepts only one infinite word must be strictly cyclic whereas $w$ is not.

Not the answer you're looking for? Browse other questions tagged lo.logic model-checking linear-temporal-logic or ask your own question.

0
Why does LTL equivalence (with next oeprator) implie trace equivalence in finite transition machines?

8
What's the simplest to implement of all decent LTL-to-Buchi translation or other LTL verification algorithms?
13
What is the difference between LTL and CTL?
5
What is the complexity of model checking Process Logic (LTL fragment)?
1
Resource for LTL formulae?
2
Which formalism is best suited for automated theorem proving in set theory?
1
LTL property - safety or liveness?
5
Do past time LTL and future time LTL have the same expressiveness?
0
Why does LTL equivalence (with next oeprator) implie trace equivalence in finite transition machines?