Given $n$ coin denominations, with $c_1=1$ and $c_2<c_3<..<c_{n}$ being random numbers uniformly distributed in the range $[2,N]$. Asymptotically, for what fraction of coins does the greedy algorithm generate optimal change using this set of denominations?

The answer is known for 3 denominations ; but what about the general case?

This is not an answer but maybe this will point you or someone else in the right direction.

I found the paper by D. Kozen and S. Zaks called "Optimal Bounds for the Change-Making Problem" wherein they give conditions for when a coin change instance's greedy change making algorithm is optimal. I will use their notation.

They go on to show that

This gives us an "efficient" (up to pseudo polynomial time) test to determine whether a coin change instance is greedy or not.

Using the above, I have run a short simulation the results of which are plotted on a log-log scale below 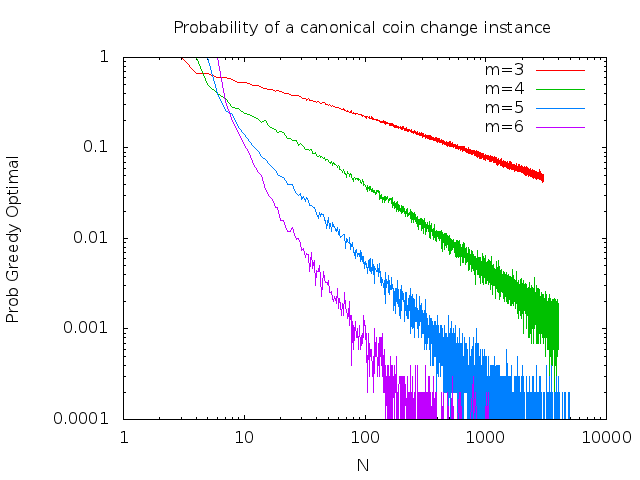 Each point represents the average of 10000 instance creations for $m$ shown and each element chosen to be distinct but otherwise uniform and at random from the range of $[1 \cdots N]$.

where $p_m(N)$ is the probability that $m$ distinct coins drawn uniformly at random from the range of $N$ is greedy optimal (otherwise known as 'canonical').

In the large $m$ limit, the probability that the greedy solution is optimal goes quickly to 0 for any non-trivial value of $N$. If the above equation holds, then it is easy to see, but there might be other ways of looking at it that give the same conclusion. For example, looking at Borgs, Chayes, Mertens and Nair's Random Energy Model work indicate that the energy is too jagged at the bottom to expect local moves (i.e. greedy moves) to give an optimal solution. This is of course for the Number Partition Problem and is only provided to give some intuition rather than a definite answer.

Not the answer you're looking for? Browse other questions tagged ds.algorithms or ask your own question.