Which is the limit of lossless compression data? (if there exists such a limit)

Lately I've been dealing with compression-related algorithms, and I was wondering which is the best compression ratio that can be achievable by lossless data compression.

So far, the only source I could find on this topic was the Wikipedia:

Lossless compression of digitized data such as video, digitized film, and audio preserves all the information, but can rarely do much better than 1:2 compression because of the intrinsic entropy of the data.

Unfortunately, Wikipedia's article doesn't contain a reference or citation to support this claim. I'm not a data-compression expert, so I'd appreciate any information you can provide on this subject, or if you could point me to a more reliable source than Wikipedia.

One reason is that in many typical cases almost half of the digitised data is noise, and noise (by definition) cannot be compressed.

I did a very simple experiment:

What we have now should be a fairly good example of what happens when you study a featureless part of a scanned black & white photo, for example, clear sky. In principle, there should be exactly nothing to see.

However, with a larger magnification, it actually looks like this: 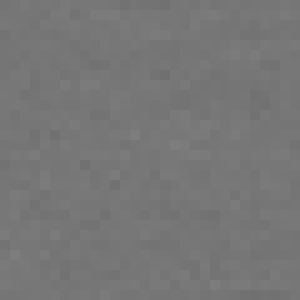 There is no clearly visible pattern, but it does not have a uniform grey colour. Part of it is most likely caused by the imperfections of the grey card, but I would assume that most of it is simply noise produced by the scanner (thermal noise in the sensor cell, amplifier, A/D converter, etc.). Looks pretty much like Gaussian noise; here is the histogram (in logarithmic scale): 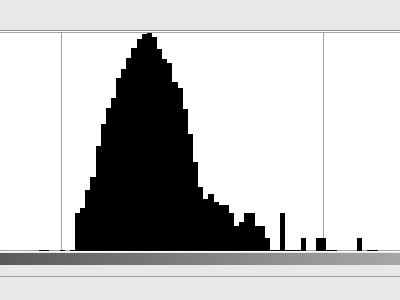 Now if we assume that each pixel has its shade picked i.i.d. from this distribution, how much entropy do we have? My Python script told me that we have as much as 3.3 bits of entropy per pixel. And that's a lot of noise.

If this really was the case, it would imply that no matter which compression algorithm we use, the 1000x1000 pixel bitmap would be compressed, in the best case, into a 412500-byte file. And what happens in practice: I got a 432018-byte PNG file, pretty close.

If we over-generalise slightly, it seems that no matter which black & white photos I scan with this scanner, I will get the sum of the following:

Now even if your compression algorithm squeezes the useful information into << 1 bits per pixel, you will still have as much as 3 bits per pixel of incompressible noise. And the uncompressed version is 8 bits per pixel. So the compression ratio will be in the ballpark of 1:2, no matter what you do.

Another example, with an attempt to find over-idealised conditions:

And what was the end result? It looks much better than what I got from the scanner; the noise is less pronounced, and there is exactly nothing to be seen. Nevertheless, the Gaussian noise is there: 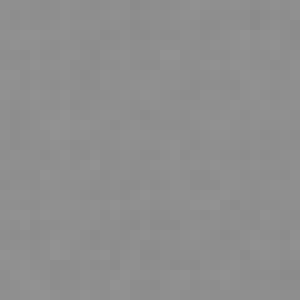 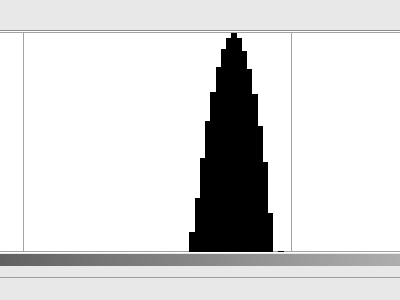 And the entropy? 2.7 bits per pixel. File size in practice? 344923 bytes for 1M pixels. In a truly best-case scenario, with some cheating, we pushed the compression ratio to 1:3.

Of course all of this has exactly nothing to do with TCS research, but I think it is good to keep in mind what really limits the compression of real-world digitised data. Advances in the design of fancier compression algorithms and raw CPU power is not going to help; if you want to save all the noise losslessly, you cannot do much better than 1:2.

Do you already know about Shannon's noiseless coding theorem? This theorem establistes theoretical limits on lossless compression. Some of the comments from the others seem to assume you know about this theorem, but from the question, I think it may be the answer you are looking for.

There is a whole community working about Kolmogorov's complexity and its variants, and another community working on loss-less compression (the example on integers that I used has equivalent on many other data types), I barely scratched the surface, and others might add precisions (Kolmogorov is really not my specialty), but I hope that this might help you clarify your question, if not necessarily give you the answer you were hoping for :)

Think of a file as a string.

Fix a string length. So now we're only looking at strings of length n.

So what fraction of strings (images, files, etc.) can be compressed at the ratio of 2:1 -- very, very few. So why does compression ever work? Because almost all data that real people are actually trying to compress is highly structured -- it doesn't look like a random file. The more random looking the data, the harder to compress. They go hand in hand. Most strings look random.

To see this in action, generate a random file using some random process. I mean a really, really random file. Now try to compress it using your favorite compression algorithm. It will either stay the same size or get bigger, almost all of the time.

On the flip side, there are highly compressible strings. Take the following string: 100000..000 (1 followed by a million zeros). The description of it fits in the previous sentence, and a computer could reconstruct it from that description (or one very much like it). Yet that description is nowhere near a million digits long.

The fact is that strings with that property (of being highly compressible) are extremely rare among all possible strings. The secondary fact is that almost all human-generated data is super, super compressible because it is so structured.

(As pointed out by Joe in his answer) Shannon - in his 1948 paper, "A Mathematical Theory of Communication" formulated the theory of data compression and established that there is a fundamental limit to lossless data compression. This limit, called the entropy rate, is denoted by H. The exact value of H depends on the information source --- more specifically, the statistical nature of the source. It is possible to compress the source, in a lossless manner, with compression rate close to H. It is mathematically impossible to do better than H.

However some class of images (for example medical grayscale images) without high-contrast edges and with smooth level transitions can be compressed (not so efficiently).

JPEG-LS and JPEG2000 seem to be the standards for lossless storage of medical images. See this table for a comparison of compression ratios (the JPEG-LS achieves a slightly better compression).

Using "lossless medical image compression" I found the following articles that may help you:

A detailed presentation of two standard lossless compression algorithms: JPEG-LS and JPG2000 in lossless mode: Lossless Compression of Grayscale Medical Images - Effectiveness of Traditional and State of the Art Approaches

Another survey: A Survey of Contemporary Medical Image Compression Techniques

Perhaps you are still wondering "What the hell is the entropy of an image?" ... OK, it's the amount of information contained in the image ... but to better understand it, you should read something about the 3 phases usually used in image compression:

You can use Google to search for a tutorial or book on Image compression (for example a quick tutorial), or try to watch an online technical video (for example Lecture 16 - Introduction to Image and Video coding).

Not the answer you're looking for? Browse other questions tagged it.information-theory data-streams or ask your own question.

23
Is there any connection between the diamond norm and the distance of the associated states?
21
How good is the Huffman code when there are no large probability letters?
2
What are the algorithms and the data structures for GUIs and input management?
3
How can AIC converge in the limit when even 2 parameter models can have infinite VC dimension?
4
Upper bound on the expected number of correct bits via a "lossy compression"