When the $X_i$ are iid for some distribution with non-negative essential support (i.e., the probability of a negative value is zero) and the distribution of $\log(X)$ has a finite variance, then the Central Limit Theorem easily implies that $X^* = \log(X_1 \times \cdots \times X_k)$ approximately has a normal (Gaussian) distribution for sufficiently large $k$.

The problem here is that each $X_i$ has a 50% chance of being negative, precluding (easy) analysis with logarithms. Nevertheless, only two things can happen (almost surely, after neglecting the zero chance that any of the $X_i$ equals $0$): either an even number of the $X_i$ are negative, in which case the product is positive, or an odd number of the $X_i$ are negative, in which case the product is negative. Each case has a 50% chance of happening. Whence, the probability density of the product has two parts (symmetric to each other about 0) and each part looks like the product of draws from a half-normal distribution. A calculation shows that the log of a half-normal distribution has finite variance, allowing us to apply the preceding observation and conclude that for sufficiently large $k$, the distribution of $\log(X^*)$ conditional on $X^* \gt 0$ is approximately Gaussian and the distribution of $\log(-X^*)$ conditional on $X^* \lt 0$ is exactly the same. ($X^*$ is an equal mixture of variables $Y$ and $Z$ where $Y$ is approximately lognormal and $-Z$ has the same distribution as $Y$.)

Simulations indicate this approximation is good for $k \gt 100$, more or less. Considerable negative skewness in the distribution of $\log(|X^*|)$ is evident for smaller $k$. 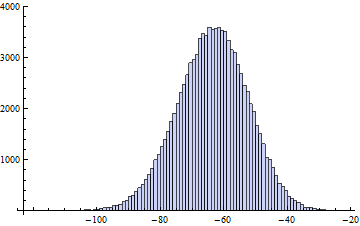 This (unnormalized) histogram documents 100,000 independent realizations of $\log(|X^*|)$ with $k=100$. Very slight negative skewness is still visible, but the general Gaussian shape is apparent, centered as expected around -63.5 with variance 123.3 (standard deviation 11.1).

It is evident from the wide range of highly negative logarithms that an attempt to plot the distribution of $X^*$ itself would be useless: it would show as a unit spike at 0. If we normalize it, though, a plot is informative. Specifically, consider the "signed geometric mean" $\text{Sign}(X^*)\exp(\log(|X^*|)/k)$: 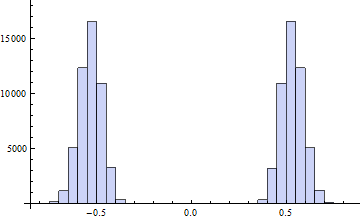 This histogram displays the same data as the previous one, but normalized as signed geometric means. The shape on the right is a lognormal distribution; the shape on the left is its reflection about 0.

The distribution of the multiplication of independent Gaussians is not close to a Gaussian.

There are various ways to convince yourself in this. E.g., compute the expectation and the variance of the product from the expectation and the variance of the individual variables. This gives you a candidate Gaussian if there were a Gaussian approximation. Now, think of some simple properties of the product (e.g., the probability it is 0) and see if your candidate is good enough as an approximation.

Not the answer you're looking for? Browse other questions tagged pr.probability st.statistics or ask your own question.

3
Estimator for sum of independent and identically distributed (iid) variables
4
Approximating distributions from samples
1
Inequality for p-norm of probability distributions
8
Exponential Concentration Inequality for Higher-order moments of Gaussian Random Variables
8
Is uniform convergence faster for low-entropy distributions?
6
Big-O bounds on the k-th largest element of iid Gaussians
4
Is this a known learning problem?