Is there an efficient algorithm to determine the parity of the longest path in a graph?

The algorithm should output YES if the length of the longest path is even otherwise the output is NO. Also, What is the complexity if we restrict the input to cubic graphs?

EDIT 1: I moved some of my comments here as requested by a friend.

My problem is LPEP={graph G: the longest path in G has even length }. The answer of Gadi A proves intractability and I accepted it. I was waiting for Karp reduction.

We begin with a graph $G$ with $n$ vertices and want to know if it contains a Hamiltonian cycle. We use a standard reduction to Hamiltonian Path (see Theorem 8.19 of Algorithm Design, which gives the directed graph version). Specifically,

The reduction for the general case can be made to work for cubic planar graphs when the algorithm says Yes iff the parity of the longest path is odd.

This time, we reduce from Hamiltonian Path directly. Thus, we begin with a cubic planar graph $G$ with $n$ vertices and want to know if it contains a Hamiltonian path. 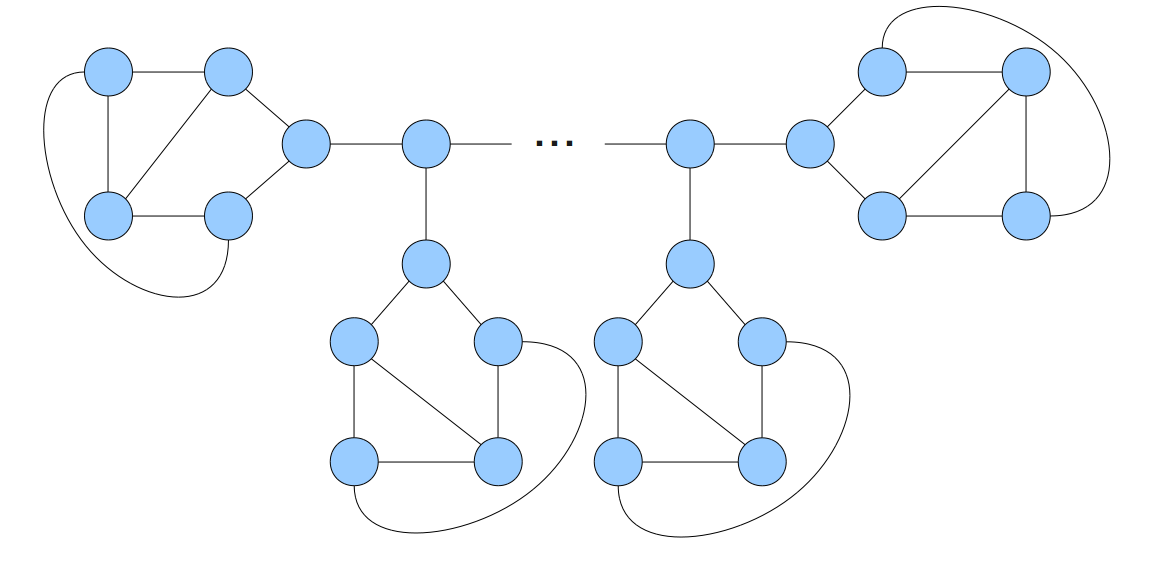 ...since that is the shortest (even) length of the longest path possible via this path gadget.

For $n < 10$, we do a brute force search for the existence of a Hamiltonian path in $G$ and add the smallest path gadget if we don't find one.

No, it is not possible to efficiently calculate the parity of the longest path of an arbitrary graph, because it is possible to design such a graph, where any calculation of the that parity implies the comparision of the lengths of longest paths of two or more sub-graphs.

One node s connects three components of a graph, and the longest path goes through that node s, like this:

C can trivially be designed to contain the longest of all paths that start at s. So, either the longest path of the whole graph is partially in A or in B.

A and B can be created out of two arbitrary graphs with a longest path of unknown length like this:

Starting with an arbitrary graph,

each edge will be expanded to length 2, and each vertex will be connected to an additional "dangling" edge of length 2.

Two such constructed graphs (A=s and B=t) can now be combined with an edge between their individual starting vertices (s and t). One of those vertices will be connected to C, so that the longest path of the resulting graph will have one end in C and the other end in either A or B.

Knowing the parity of the longest path of this resulting graph implies knowing whether the path ends in A or B.

Of course, there exists a simpler proof by reducing this parity problem to that of the existance of an Hamiltonian path, but that proof would have been too easy.

Not the answer you're looking for? Browse other questions tagged cc.complexity-theory ds.algorithms graph-theory or ask your own question.

2
Best bounds for the longest path optimization problem in cubic Hamiltonian graph?
10
Finding short and fat paths
8
Upper bounds on the length of longest simple path in non-Hamiltonian graph?
10
Finding min-max vertex-disjoint paths with a common source on planar graphs
18
Reconstructing a tree from separator queries
11
How many disjoint edge-cuts a DAG must have?
1
Variation on longest path in a DAG
12
Graph classes for which the diameter can be computed in linear time
8
Do graphs with large number of paths contain large chain minor?