I'm writing a program that receives data over a network connection. Every data point is simply a 4 dimensional vertex, lets call the dimensions X,Y,Z,W. The values of each dimension are exponentially distributed.

I'm currently saving the data and plotting the data, in real time, as a 2D scatter plot. Here is an example of such a plot: 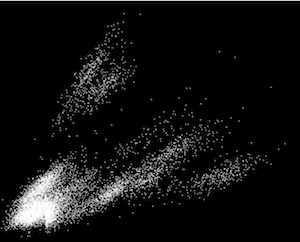 Here is some pseudo code that illustrates the idea:

I anticipate that these data structures will eventually contain upwards of 50K+ points, and each second between 10-100 new points will be received by my program.

Are there data structures that are designed for these kind of operations? If not, what would be the most efficient way implement a structure like this for 4 dimensions?

I'm not sure what you mean by 'overlapping points', and even less clear how you construct a 2D scatter plot from 4D data unless by doing some kind of projection. Having said that, what I think you're looking for is a dynamic near-neighbor data structure. Specifically, you want a data structure that processes queries of the form "Who's my nearest neighbor in the current set" and "insert a point into the current set"

While there's a ton of work on different kinds of near-neighbor structures, your particular situation (dynamic 4D points) suggests at least starting with a grid-based structure. Make (4D) buckets based on segmenting the coordinates, and hash the points in, and then for a query you can do a spiral search (or something similar) around the cell your query lies in.

The next idea would be to build a generalized quad tree data structure (a compressed quad tree) or even something involving space-filling curves, if this first approach doesn't yield the performance you need. There are even more powerful methods, but I wouldn't recommend looking into them till you've exhausted the simple approaches.

Bottom line: "dynamic" and "nearest-neighbor" and "low dimensional" are your google friends.

Not the answer you're looking for? Browse other questions tagged ds.data-structures cg.comp-geom near-neighbors or ask your own question.

8
Dynamic planar exact k-nearest neighbors for pathological data
13
Best way to determine the minimum dimension of a structure given only distances between points
4
Search for all nearest neighbors within a certain radius of a point in 3D?
1
Far point queries in high dimensions
1
Data structure for storing points and finding a predecessor of a point