Complexity of a switch network problem

A switch network (the name is invented) is made with three types of nodes:

The switch node has 3 exits: Left, Up, Right; has two states L and R and a target state TL or TR. Each switch can be traversed with the following rules: 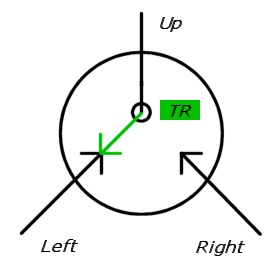 The decision problem is: "Does a path from the Start node to the End node exist such that all the final states of the switches match the corresponding target state?"

Obviously, all the switches that are not initially in their target state must be traversed (or touched) at least once;

This is a quick draw of a trivial network (made with Excel ... I'll make a better one): 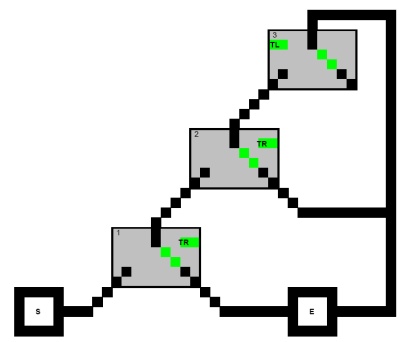 A trivial solutions is:

The problem is in $NPSPACE = PSPACE$; before posting a sketch of my proof that it is in NP, I found an error; so the open questions are again:

The problem is at least NP-hard, by a reduction from 3-SAT.

First consider the problem of finding a path from the Start to the Exit of the following directed graph with the restriction that no path may visit all three (square) nodes of a clause:

For this graph, such a path only exists if the formula $(X1 \lor X2 \lor X3)\land(X1\lor\neg X2\lor X4)$ can be satisfied. We can build such graphs for arbitrary formulas in 3-CNF, and finding such a path is NP-complete.

We transform these graphs to a switch network. For this we use three gadgets:

In the following illustrations, switches are drawn as two incoming arrows, one of which is dashed (disabled). The target direction is drawn with a black circle (such that the solid arrow must eventually be on the side of the circle).

Remark: We will use boldface to distinguish the Exit of the graph from exits of gadgets. 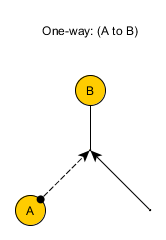 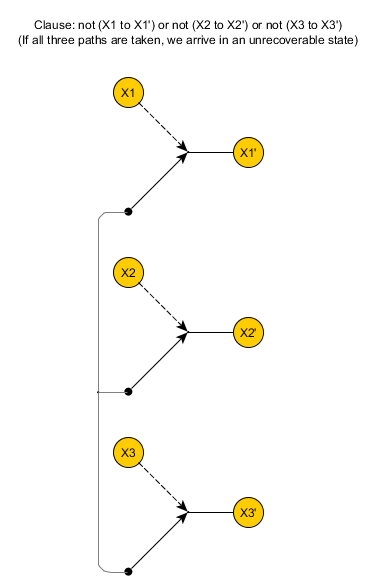 Recall that for the original graph, finding a path that led to the Exit and did not visit all three square nodes of any clause was NP-complete. Now consider the problem of reaching the Exit of the transformed graph without worrying about the target positions of the switches.

In the first case, the One-way gadget must have first been traversed in the intended direction, in which case the path might as well have avoided traversing it in the first place.

It remains to show that for any solution of the original graph problem, the switches of the transformed graph can be placed in their target position. For this, we make use of the fact that the Exit wire can only be reached when there is a solution, or some Clause gadget becomes unrecoverable.

We should remark that Clause gadgets can only be recovered when entered from an untraversed exit; and due to the One-way gadgets that are placed between Clause gadgets and the next variable, this cannot happen until the Exit wire is reached.

It is still unclear if the problem is in NP or PSPACE-hard. An NP-hardness reduction constructing a planar switch network will have great implications for restricted variants of Sokoban, namely because all switches are equivalent to the Sokoban gadget below. 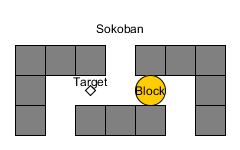 Not the answer you're looking for? Browse other questions tagged ds.algorithms reference-request graph-algorithms np or ask your own question.

12
Problems not known to be PSPACE-complete

13
Is there an online-algorithm to keep track of components in a changing undirected graph?
7
Is it easy to "fit a wrapped chain in a graph"?
0
Reachability in Dynamic Line Graph
2
How to choose good diagonals when partitioning an orthogonal polygon into rectangles?