Do Delaunay triangulations on the sphere maximize the minimum angle?

Inspired by but unrelated to this question on Math.SE.

FIRST ARGUMENT: This was my first answer. Note that this argument is wrong. See my second argument below.

I don't think it's true. The reason that it works in the plane is that in a circle, the inscribed angle subtended by a chord is one half the corresponding central angle. Thus, if we have a triangle with a small angle, any points that would make a larger angle with the opposite edge are inside the empty Delaunay circle, and so aren't one of the points in the configuration we are finding a triangulation of.

Now, suppose you have a Delaunay triangulation on the sphere. Place a point at the center of the sphere, and project all the pionts onto a plane. The edges of the triangles (great circles on the sphere) are all taken to line segments. But the circles giving the empty ball property are taken to ellipses, and so if there's a point outside the projected ellipse but inside the circumcircle of the triangle, this point would make a larger angle with the edge.

Wait a minute. This answer is completely wrong, because the central projection does not preserve angles. I still think the conjecture is wrong, because I have a much more complicated argument that the theorem about inscribed angles does not hold on the sphere. Here's the argument: 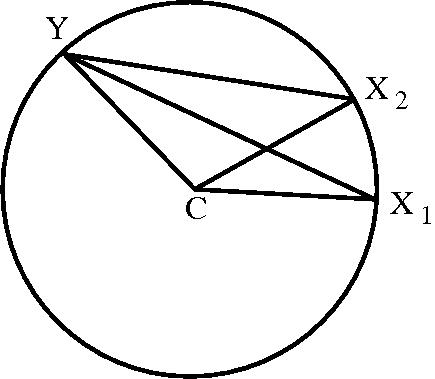 For the locus of points $Y$ making a constant angle $X_1YX_2$ to be a circle, we thus need that the difference of areas $A(X_2CY) - A(X_1CY)$ depends only on the arclength $X_1X_2$. However, this is incompatible with the observation that $A(XCY)$ is $0$ for $X$ diametrically opposite $Y$ and for $X=Y$, but grows to some maximum size in between.

Thus, the locus of points $Y$ with constant angle $X_1YX_2$ is not a circle. This means that for some triangle $X_1YX_2$ we can find a point $Y'$ outside the circumcircle of $X_1YX_2$ so the angle $X_1YX_2 < X_1 Y' X_2$. We can then use this to build a counterexample to the conjecture that Delaunay triangulations on the sphere maximize the minimum angle.

Not the answer you're looking for? Browse other questions tagged cg.comp-geom delaunay-triangulation or ask your own question.