Counting the number of thick regions which overlap a square

Let $S$ be a unit square. As a function of $\beta$, what is the maximum number of $\beta$-fat pairwise-disjoint regions with diameter at least 1 which can intersect $S$?

For example, if $r_2 = r_1=\frac{1}{2}$, then the regions are unit circles, and there are at 7 circles with diameter at least 1 which can overlap $S$ without overlapping each other. In the figure below, we have depicted a unit square and 7 unit circles which overlap the square. 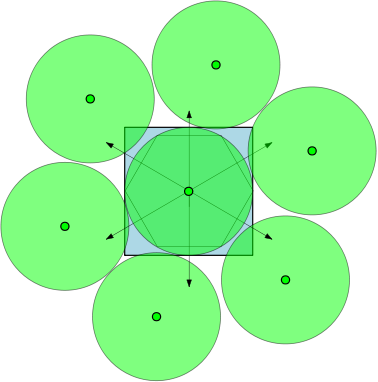 I think that the maximum number of pairwise disjoint fat regions which overlap the square should be strongly related to circle packing.

The worst-case shape for a region is something like a "ball & chain". Below I have depicted such a region for $\beta=2$ with diameter 1 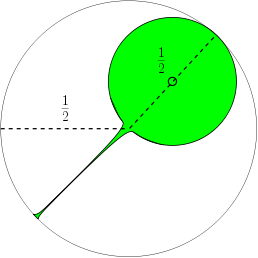 and these can pack within distance 1 of the unit square obviously much more tightly than I've depicted them. 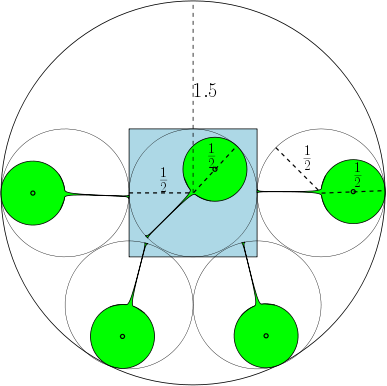 Note that the actual ball & chain region is defined by the green area, and the outer circle is just a guide to depict the fact that these regions have fatness 2. In fact, the chain part of the region, can "bend" to allow more regions to be packed. 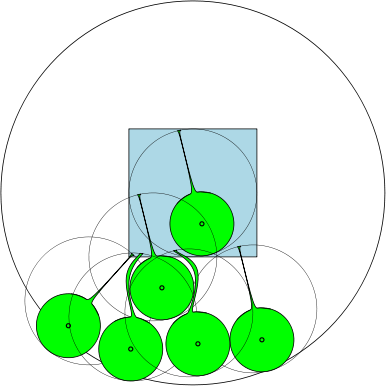 14
The number of triangulations of a set of $n$ planar points: Why so difficult?
6
How to partition 3d Voronoi graph into n-number of balanced cuts while minimizing the number of edges that go between the parts?
22
Detecting two kinds of almost-simple polygons
3
Number of Maximum Overlap in n-Dimensions
21
Maximum disjoint set: what is the actual approximation factor of the greedy algorithm?
5
Number of points on the interior of the convex hull of a random subset