In the paper Quantum Random Walks Hit Exponentially Faster (arXiv:quant-ph/0205083) Kempe gives a notion of hitting time for quantum walks (in the hypercube) that is not very popular in the quantum walk literature. It is defined as follows:

Normally you would like to know the minimum $T$ such that $p>0$. It is not possible (correct me if I'm wrong) to define a notion of average hitting time because you will need to make measurements during the walk, and that would collapse it to a classical walk. That's why we have the one-shot notion. In the same piece of work, there is an application to quantum routing (cf. section 5).

In order to know that the walk arrived at the target vertex, you need to make a measurement only at that node. For example, in the $n$-dimensional hypercube with $2^n$ nodes if you start at node $|\Psi_0\rangle=|00\dots00\rangle$ and have as target node $|\Psi^f\rangle=|11\dots11\rangle$, the paper shows that $T=O(n)$ with bounded error probability, i.e. $p\to 1$ as $n$ becomes very large. So in order to detect that the walk arrived at $|11\dots11\rangle$ you make a measurement after $\Omega(n)$ steps. This is an exponential speed-up.

I'm aware of the other notions of hitting times for quantum walks (like Szegedy's or Ambainis's). I'm particularly interested in this specific hitting time.

Update (9/24/2010): Thanks to Joe Fitzsimons questions 2 and 3 were completely answered. Although question number 1 still remains. First, I will restate question 2 in more specific terms now that I finished reading the paper that Joe recommended me and a couple more (for example see arXiv:0802.1224), and then I'll give a concrete example of what I have in mind for question 1.

2'. If you are sending a concrete message (like a sequence of classical bits), you can use a more complicated unitary that will copy this information during the steps of the walk. To send quantum states you need something more. The spin-chains channel uses a linear array of qubits with a fixed coupling. You can put the state (pure state, I don't know if it works for mixed states) you want to transmit in one end and it goes to the other end with high fidelity according to numerical results. I still have to give it more thought but I have two ideas: i) put a chain on each link of the graph, or ii) make the walk, find the target state, then make the channel between initial state and target and then send the state. Are any of these approaches plaussible? Does it work with mixed states?

1'. Consider a walk on a 2-dimensional grid centered in the origin with $n$ nodes with each side with length $\sqrt{n}$. Set the initial state at $v_0=(0,0)$ and the target state at $v^f=(\sqrt{n}-1,a)$ where $a=0,\dots,\sqrt{n}-1$. Because the walk is symmetric we have that the same hitting time and hitting probabilities hold for any target somewhere on the border of the grid as shown below. 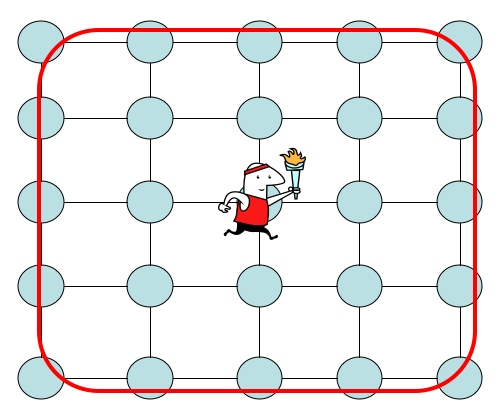 Therefore the information we have is that $dist(v_0,v^f)=\Omega(\sqrt{n})$. We can use this to know when to make the measurement. Can the one-shot hitting time be used to search this grid? Here you need that information. An open problem in searching a grid is that we know that $\Omega(\sqrt{n})$ is a lower bound for search, and for grids the best upper bound is $O(\sqrt{n\log n})$. Either we are not being able to find a better algorithm, or the techniques for proving lower bounds when you use them on grids are giving a weak lower bound. Can you show that the only way to go below $\sqrt{n\log n}$ is having "a piece of information" as the one in the question? This would imply a way of proving a lower bound for grids. Does it make any sense?

I'm not so familiar with this paper, but I will try to give a rough answer to each of your questions after a cursory skim.

UPDATE: (To answer the updated question regarding random walks on a grid or other lattice)

One approach to the measurement issue you highlight with the spatial search problem is to simply make a measurement at each timestep such that it returns 1 iff the the vertex the walker is currently at (say $v_t$) is equal to $v^f$ and the current timestep t is the hitting time for that vertex. This should avoid the issue of collapsing the wave function, as the measurement is only made for each vertex once the hitting time is reached, and it only registers collapses onto a location if that location is the correct result.

With regards to question 1, knowning the distance between the unknown target vertex and some known origin vertex on the hypercube can help the search process. However, the value of the distance itself determines how much helpful this information is.

Typical quantum walk algorithms are usually variations/approximations of Grover search: they involve an approximate rotation of the state vector in a 2-d subspace of the total Hilbert space.

You can use these algorithms to efficently prepare an approximately uniform superposition of all vertices at a given distance from the origin. Then you can search your target vertex inside this superposition using quantum or classical (Monte Carlo) search: For classical search just prepare the superposition and measure it in the vertex basis and repeat until you find the target. For quantum search, the superposition preparation procedure (and its inverse) becomes a subroutine that replaces the Hadamard transform in the Grover iteration.

The usefulness of this depends on the value of the distance: in the $n$-dimensional hypercube the number of vertices at distance $d$ from a given origin is the binomial coefficient $\binom{n}{d}$. Hence the majority of vertices ($\approx \frac{2^n}{\sqrt{\frac{\pi}{2}n}}$) are at $\approx n/2$ distance: while you can efficiently prepare the superposition of these vertices, searching the target inside it still takes exponential time.

11
Quantum Computation - Postulates of QM
12
Transitioning from quantum to classical random walks on the line
0
Confusion with the proof of constraints for a particular adiabatic quantum evolution
3
How well can an arbitrary (unknown) quantum state be imperfectly cloned?
1
Can a measurement commuting with the stabilizer of a state disturb the state?
1
Finding a basis for quantum measurement with maximum distinguishability