I have a quite "common" need : making a directed graph (with one or several cycles) a directed acyclic graph (DAG).

But the way I want to achieve it is, I guess, way more specific : I would like to break cycles by duplicating nodes, and rerouting edges. 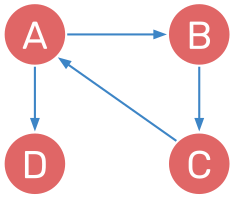 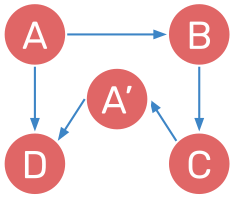 The case above may appear quite simple, but I am tryig to build an automated method to do that. I also have some cases with interwined cycles, which are way more complex to deal with. Finally, I aim to minimise the number of duplicated nodes. I usually work with graphs having less than 100 nodes.

The aim of all this is to be able to order nodes (using Kahn or DFS).

This is also the reason for keeping the original A > D arc, forcing the resulting order to be the first one mentionned above.

Any leads about how to do that ? Any existing methods or scripts (preferably python) ? During my research, I have never found any information about such a way to break cycles, maybe I have not searched enough, or maybe not in the good direction.

Note : this question has also been posted on StackOverflow [here]

This problem is Feedback Vertex Set in disguise, and hence NP-Hard, but I'd imagine there are good heuristics out there (I don't know the references myself, maybe someone can help me out here).

More specifically, for an input graph $G = (V, E)$ with minimal FVS $S \subseteq V$, there is a solution to your problem that copies each member of $S$ once (and no other nodes are copied at all), and this is best possible. That solution is as follows. Define the nodes of $G'$ in the following order: first we put all the nodes in $S$ (in any order), then we put the nodes of $V \setminus S$ in topological order in the DAG $G \setminus S$, and finally we put another identical copy of the nodes of $S$ (again in any order). The edges $(u, v) \in E$ are placed in $G'$ in the natural way: if either endpoint $u, v \notin S$ then there is only one way to place the edge in $G'$, and if both $u, v \in S$ then in $G'$ the corresponding edge goes from the first copy of $u$ to the last copy of $v$.

This graph $G'$ will have the following property: you can map the nodes of $G'$ to the nodes of $G$ in a way that bijects the edges of $G'$ with the edges of $G$. I believe this is the right way to formalize the node-splitting process you are describing (in the node-splitting view, you would iteratively split each node $s \in S$ into the two corresponding nodes in $G'$, rerouting edges such that the incoming edges all go to one new copy $s_1$ and the outgoing edges all go to the other new copy $s_2$).

Not the answer you're looking for? Browse other questions tagged graph-theory directed-acyclic-graph or ask your own question.

4
Given a network flow, are there bounds on the change in weight on nodes?
2
minimal cycles in undirected graph
12
NP-complete graph property that is hereditary, but not additive?
4
Paths and Probabilities for a Random Walk on a Graph
17
Reference for mixed graph acyclicity testing algorithm?
4
Enumerating all (super)orientations of an undirected graph